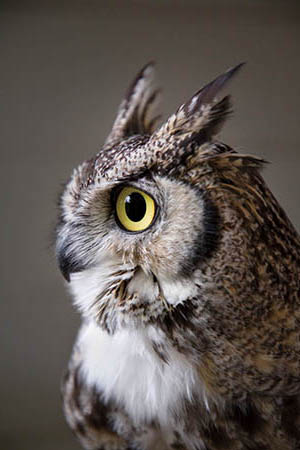 Oden, a Great Horned Owl, is an educational ambassador at the John James Audubon Center in Pennsylvania. He helps teach thousands of visitors a year about birds of prey, other birds, and how people can protect all wildlife and their habitats.

Birds of prey. Who are they? Ospreys, owls, hawks, eagles, falcons, and kites belong to this group of birds. Prey is a word for animals that are hunted by other animals for food, and these birds are definitely hunters. But wait! Don’t other birds catch live prey? Don’t some birds catch and eat insects, worms, frogs, and a whole host of other living things? Yes they do. But the birds of prey are also called raptors. That word means these birds catch their food with their powerful feet, which are equipped with sharp pointed claws called talons. When a raptor seizes its prey with its feet, the talons are usually what kills.

Raptors—birds of prey—have other characteristics in common: a curved, razor-sharp beak and eyesight so good that some of them can spot a potential meal from hundreds of feet in the air. There are also plenty of differences among them, from their size to how they hunt and what they eat. Owls hunt mostly in low light—dawn, twilight, or night—perching on a tree branch waiting for a small animal on the ground below to attract its attention. Ospreys and Bald Eagles feed mainly on fish, which they spot while soaring high above the water. Hawks also soar, but some of them eat mammals and others eat other birds. Falcons also prey on birds.

Curious about birds of prey? There’s a lot more about them in the Audubon Adventures magazine you can open in the column on the right. Then you can check your raptor knowledge with an online quiz, and play the “Hunter vs. Hunter Game.” Explore! Have fun!