Here’s a basic definition of what migrate means in the animal world: To move from one region to another in a regular cycle, usually to breed and/or to find a reliable supply of food in the spring, and then to return in the fall to a place to spend the winter. Migratory birds generally spend the spring and summer where the conditions are right for raising young, which means mild weather, plenty of good nesting places, and a reliable supply of protein-rich food to feed growing chicks.

Birds aren’t the only animals that migrate. Whales, fish, crabs, bats, butterflies, dragonflies, bison, reindeer, wildebeest, and zebras, among others, also move from place to place in regular annual cycles. But if you could make a list of every species that migrates, the majority of them would be birds. Some birds migrate in one flight, without stopping. Others stop along the way to feed and rest. Some fly alone and others fly in flocks. Some species migrate a relatively short distance of a few hundred miles, while others travel distances that seem almost impossible—thousands and thousands of miles.

Flyways: Highways in the Sky

North America’s mountain ranges and coastlines run mostly north-south, and so does its largest river, the Mississippi. These natural features create four main “flyways” that many migrating birds follow. From west to east, the four main routes are the Pacific Flyway, the Central Flyway, the Mississippi Flyway, and the Atlantic Flyway. Which flyway do you live in? 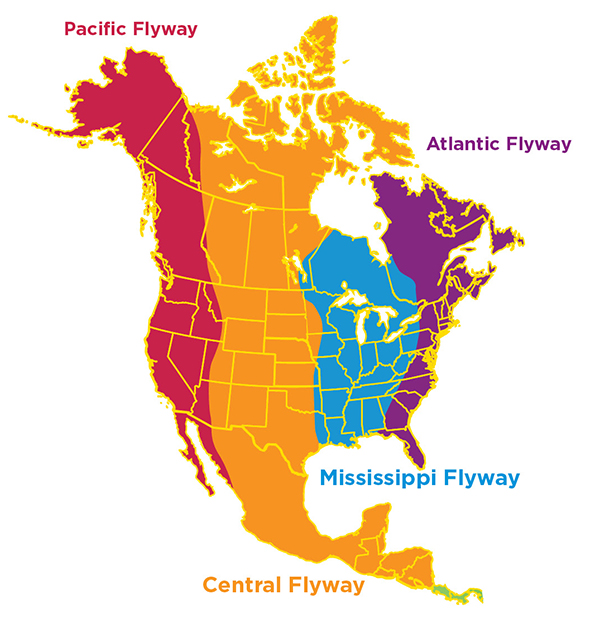 Migrating land birds that use these flyways after breeding may start their southbound journeys in the far north—Alaska, the Arctic, or northern Canada—or they may take off from somewhere in central or southern Canada or the Lower 48 states. (“Lower 48” means all of the states except Alaska and Hawaii.) The journeys may end somewhere in the Lower 48 or on a Caribbean island, in Mexico, Central America, and beyond—even as far away as the southernmost tip of South America.

People may think that birds are delicate little creatures, not known for strength and endurance. Here are some facts that might change their minds.

Every year, birds face high winds, big storms, predators, and habitat loss to make their migratory journeys. To find out more about how and why they do it, open the student magazine, Birds on the Move, that’s in the column on the right. And check out all the other parts of this website, too.